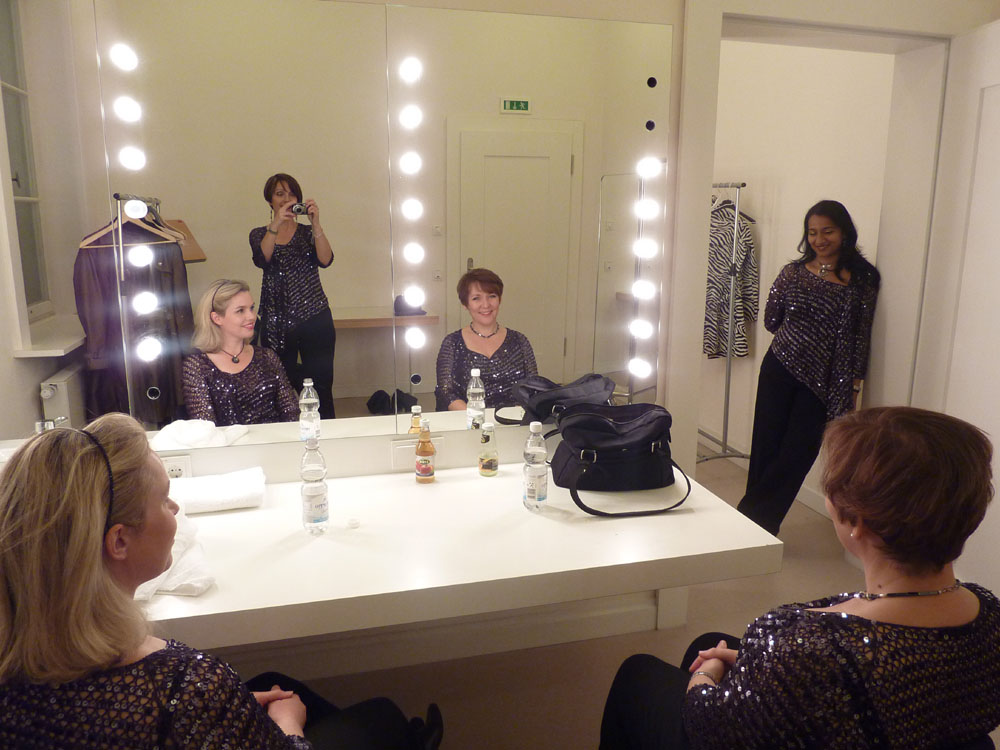 “This concert was the first of three in Dresden – Tehillim, The Cave and Music for 18 – all with different teams of singers. Rachel, Caroline and I flew out for the first rehearsal which we did without Heather, who had another commitment in London. Fortunately, the sections that usually need the most rehearsal are the ones that Rachel and I sing with the clarinets, so we knew this wouldn’t be a problem. Also, we had our old friend Brad Lubman at the helm, so we didn’t need to convince him that Heather could easily slot into the proceedings at the dress rehearsal. She knows Tehillim quite well now, having sung every performance of the piece with Synergy since our first concert in 1996!

We were pleased to be at the Holiday Inn situated half way between the old town and Hellerau. The rooms were very comfortable, there was a gym, a pool, free Wi-fi, and a fabulous breakfast. They really had thought of everything….

It was surprisingly cold in Dresden, so I was forced to buy a nice new jumper from C&A. Now that you can’t get them in the UK, C&A clothes are the new designer wear! 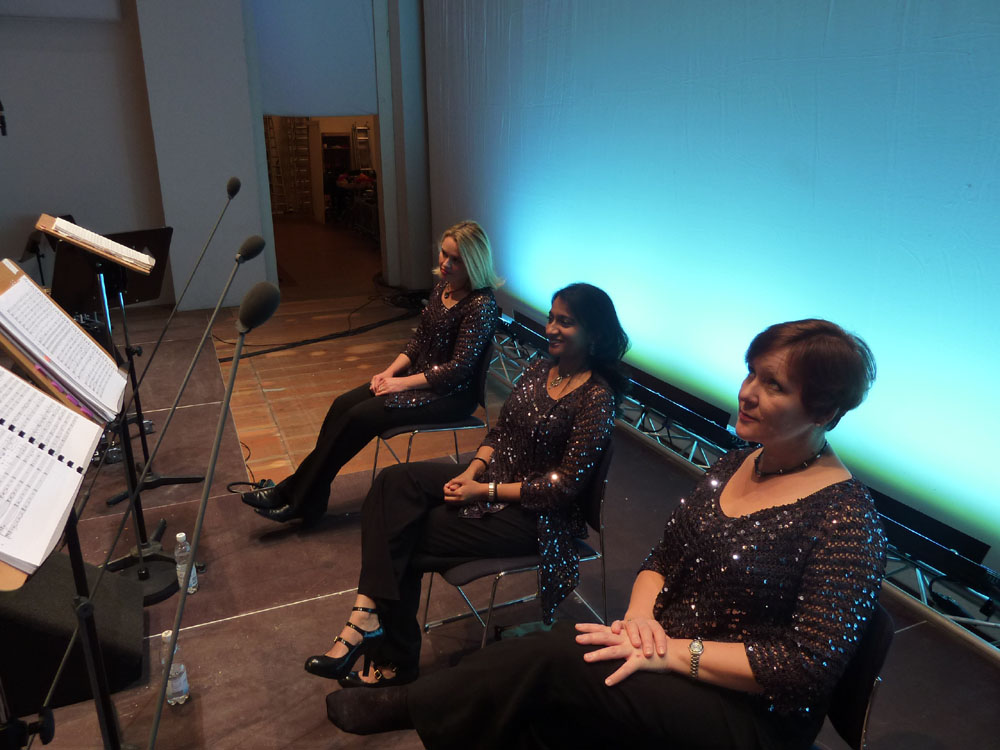 The Festspielhaus at Hellerau looks brand new but has actually had a long and interesting history. First opened in 1911, it played an important role in cutting edge theatre and dance until it was commandeered by the Nazis, and then the Soviet Union. Only released from its military shackles in the 1990s, the building is still being refurbished, but is already re-established as a dynamic contemporary arts centre.

Unusually, our dress rehearsal was on the day before the concert – in concert dress, so that the in-house photographer could take some pictures for the archives. It feels slightly odd to us doing a concert without any sort of play through on the day, but we have come across this preferred schedule a few times now. The plus side is that you can have a nice relaxing day before the concert, but the danger is that you relax too much – or exhaust yourself sight-seeing and shopping!

Frauenkirche, Dresden – completely rebuilt after being fire-bombed in WW11

The Dresden Philharmonie played really well. Tehillim isn’t terribly strings-friendly – there’s a lot of hanging around on long chords and quick rhythmic changes, so much of it must feel like an exercise in counting. The players had had a rehearsal before we arrived, and it was nice to hear from them that the piece immediately made sense once the voices were added. The maracas player deserves a particular mention, though I’m afraid I don’t know his name. He played wonderfully accurately on bijoux maracas. I think they worked extremely well – perfectly loud enough and with plenty of clarity. In my experience, the role of the maracas can cause all sorts of hang-ups in this piece. My view is that the conductor simply sets a clear tempo for the canons, we all get into the groove, and the canons sing themselves. As soon as anyone starts worrying about who is following whom, the rhythm starts to wobble. Fortunately, in Dresden, none of this was an issue, so we could all just enjoy the music – hurrah!

I’m pleased to say that the audience enjoyed it too, though we weren’t sure for a moment! Tehillim is in four sections, but there is only one short break in the middle of the piece. It ends with a fast, joyous “Hallelujah”, but clearly the audience wasn’t sure whether we’d finished. At the end, after what felt like ages, the silence was finally broken by a smattering of unsure hand claps, so we thought “what the hell” and took a bow! Rapturous applause followed (thankfully!) and all was well.

Rachel and Heather flew back to London the following morning, while Caroline and I headed up to Paris to meet Julia Batchelor and Joanna L’Estrange for two performances of Music for 18 Musicians with Ensemble Modern and Steve Reich.”