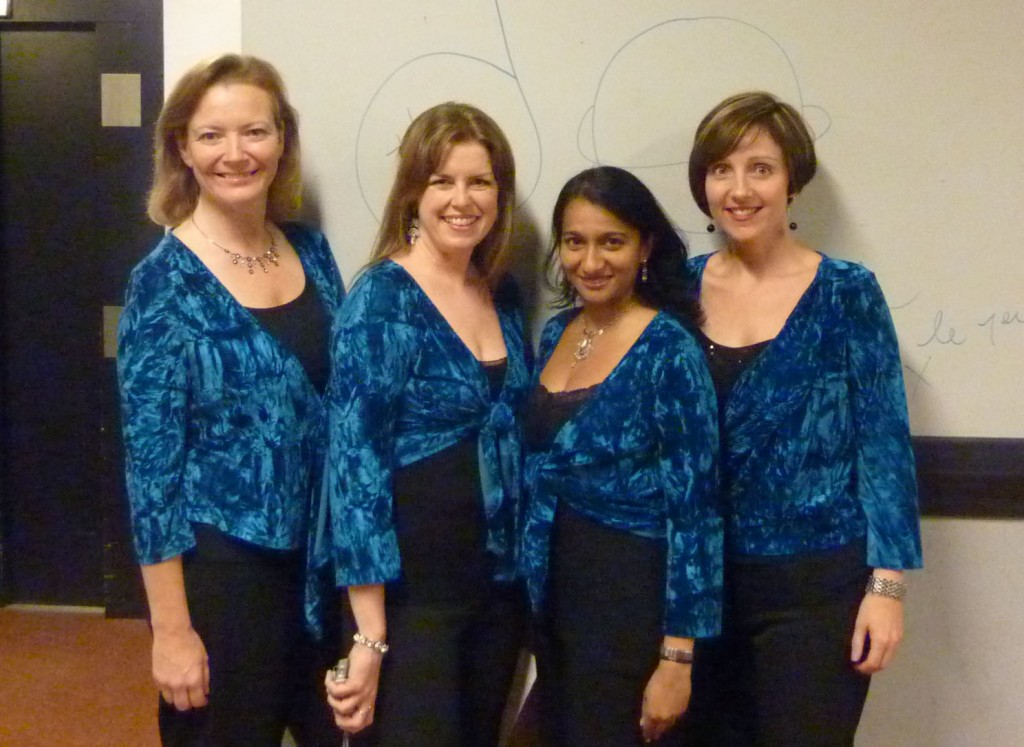 “Following our Tehillim triumph in Dresden, Caroline and I flew to Paris via Munich. Just as we were waiting to take off in Munich, the captain apologised for the delay and explained that this was due to there being no-one to load the luggage onto the plane (some dispute or other) – so he was going to take off anyway – oh marvellous! This of course meant that we would land in Paris without any bags (mine containing concert clothes for all the singers the following evening) and no way of knowing when we might see them again. So, there we were in Charles de Gaulle, a planeful of passengers queuing up at the Lufthansa desk, like an army of Oliver Twists, waiting to be given a measly bag of overnight toiletries and a t-shirt made of such poor quality cotton that you could see your hand through it. But not to worry – we were assured that we could sleep soundly in the knowledge that our bags would be delivered safely to the Holiday Inn during the night, ready for us in the morning – yeah, right!

You may not be surprised to hear that our bags did not in fact turn up that night. Fearing the worst, I’d called down to reception at midnight, again at 5.30am (having been woken by noisy neighbours), and finally at 9am – at which point I hurriedly showered, got dressed and headed down to reception to start the bag chase. I got through to the Lufthansa desk at CDG who said that the bags were with the delivery company. So I called the delivery company. They said that they should have the bags by 11am, and hoped to get them to us by 5pm. Our concert was at 7.30 that evening, we were leaving Paris the next morning at 5am to fly back to Dresden, and at the moment our cases were apparently nowhere at all. All I could do was call the delivery company every hour or so, in the hope of news – and then keep everything crossed. The worst bit, as ever in these situations, was not knowing. Already feeling very tired, having had only four or five hours sleep, would I now have to head into central Paris to buy another set of concert outfits, or would our cases actually show up? To cut a very long morning short, the cases did finally show up at around noon – though no-one at the hotel thought to let us know. Only when I checked again with reception at 12.30 did they mention that the cases had arrived half an hour ago. Anyway, my only thought at this point was – phew!!! 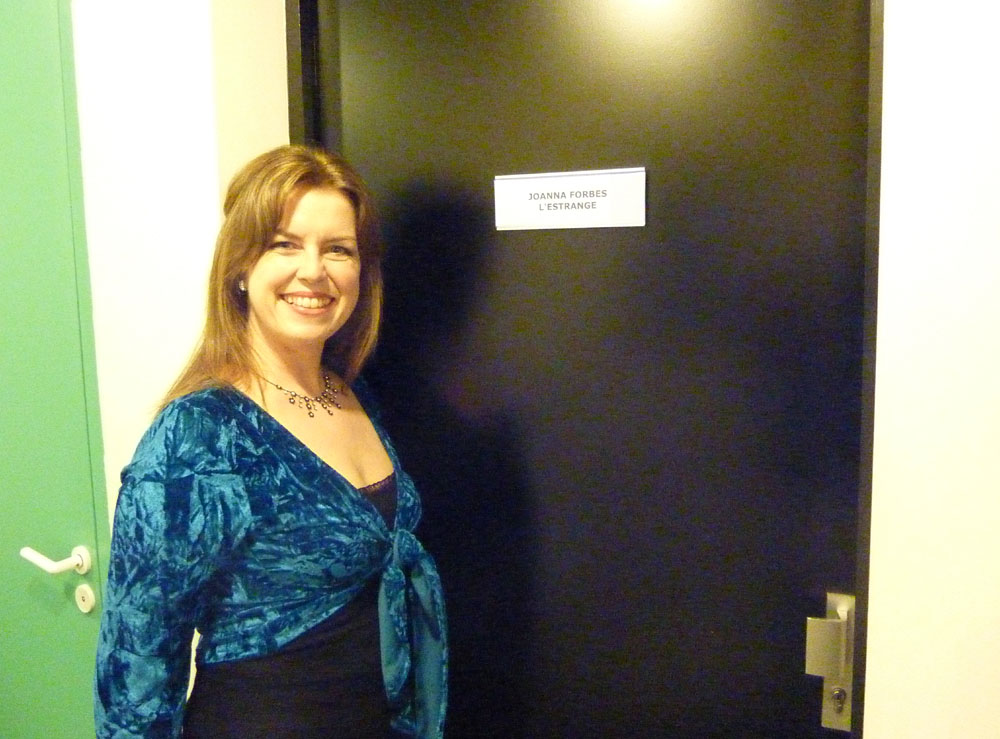 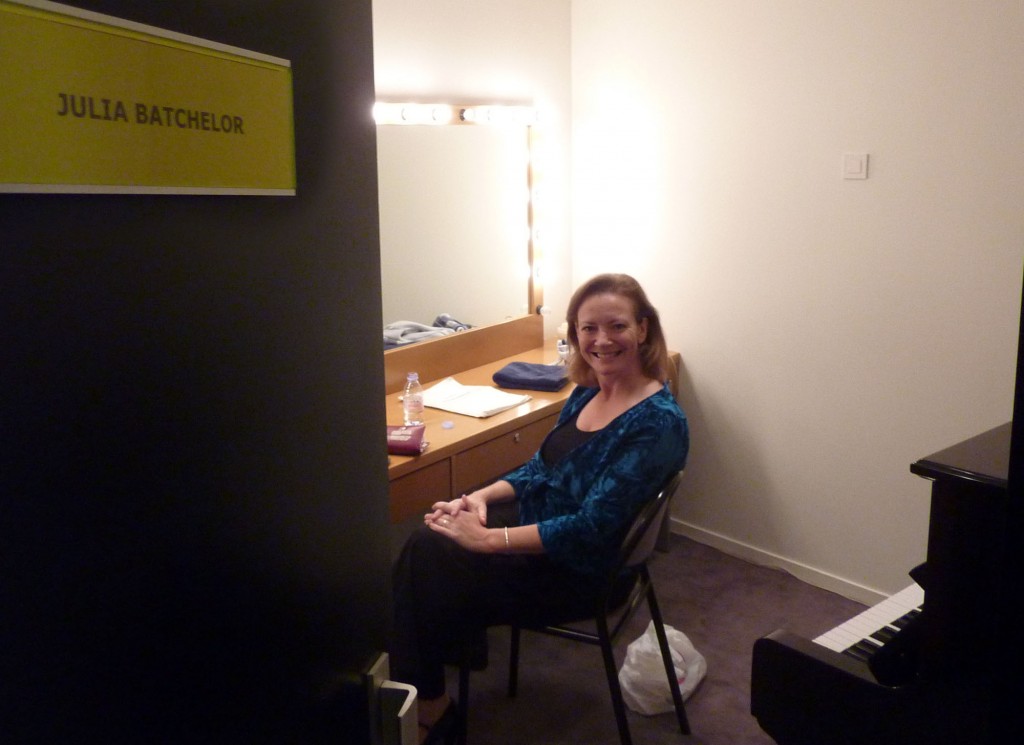 We four singers had individual star dressing rooms at the Cité – naturally! We love this concert hall and have performed here many times. Earlier this year, we sang Tehillim with Ensemble InterContemporain, but I think the last time we sang Music for 18 in this hall was in 2006 with Steve Reich & Musicians, in celebration of Steve’s 70th birthday. Here we were again for his 75th. In my opinion, the Cité is one of the best halls in the world for Music for 18. The acoustics are just right – both in the auditorium and on stage. The piece sounds vibrant and powerful, but the volume is not overwhelming and you can hear everything.

Although Synergy had one more Music for 18 to go in Dresden, this was to be my last one of the year (singing at least – still some coaching to do). The Ensemble Modern players not involved in The Cave were heading back to Frankfurt the following morning, so I had to say a few sad farewells. We’ve had such an amazing season of concerts with EM, it was strange not being able to say “see you in …. (wherever it might be)”.

We all had to sign an agreement in respect of a recording that was being made of the concert. Julia was thrilled to see that she’d been listed as the conductor (chef) – albeit briefly!

The concert was a veritable triumph. Apparently, people were talking about it for days afterwards, but there were no after-show drinkies for Jo and me, sensible souls that we are. We were leaving for Dresden the following morning at the crack of dawn for a VERY long day of The Cave – but at least we had our suitcases with us!!”