Synergy Vocals’ relationship with Steve Reich goes all the way back to our first concert in 1996 – a performance of Tehillim for Reich’s 60th birthday celebration in London, an LSO concert conducted by David Robertson (now happily known as our “chief conductor”).

We have performed all of Steve Reich’s vocal music on countless occasions all over the world (premiering Three Tales and Daniel Variations), and are now well-known as one of the finest exponents of his music.

It was an honour to share the stage on many occasions as honorary members of Steve Reich & Musicians, including a 2006 European tour for Reich’s 70th birthday. 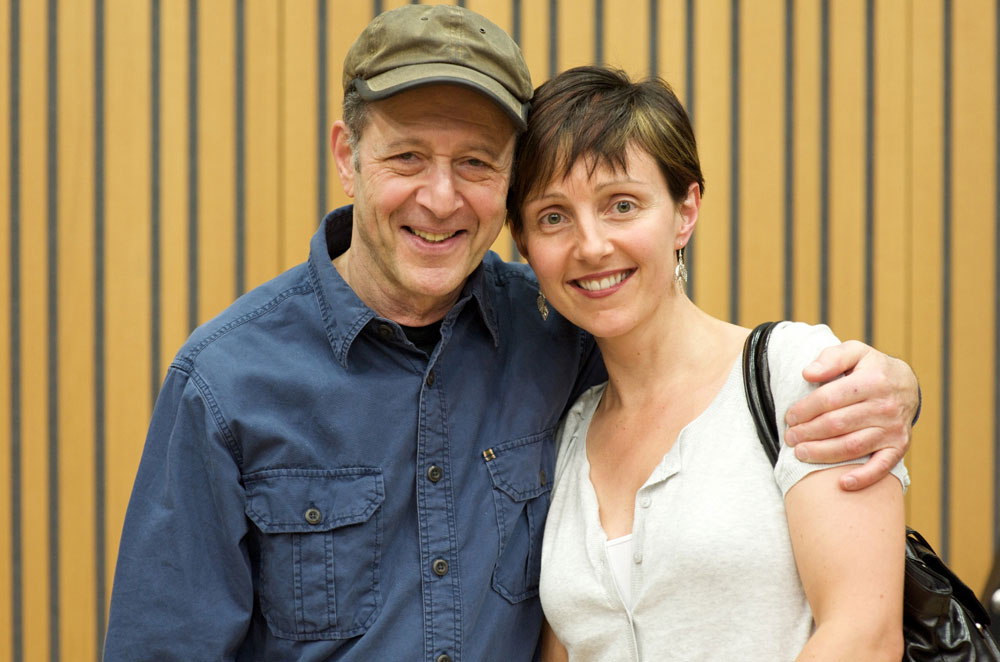 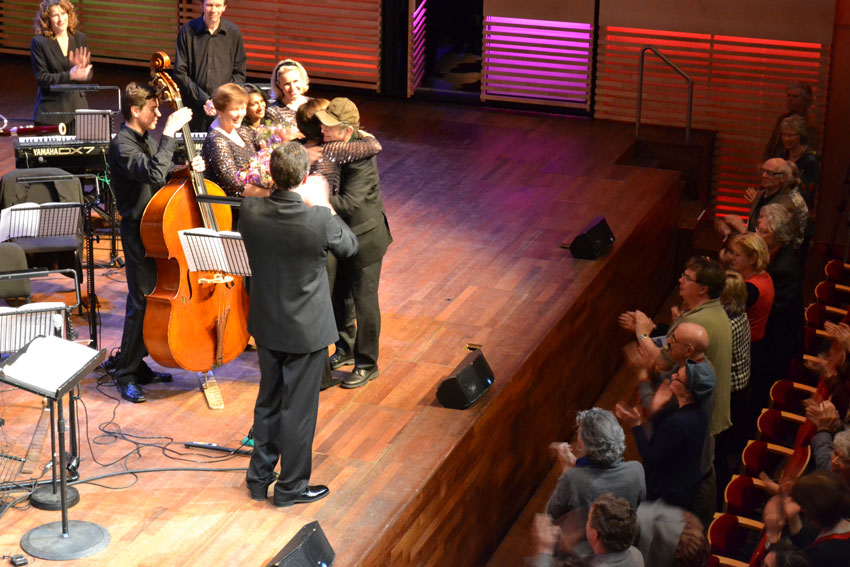 The Cave
Daniel Variations
The Desert Music
Drumming
Know What is Above You
Music for 18 Musicians
Music for a Large Ensemble
Music for Mallet Instruments, Voices & Organ
Proverb
Tehillim
Three Tales
Traveler's Prayer
You Are (Variations) 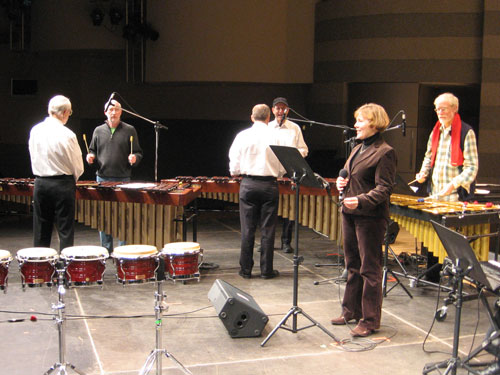 “The players who perform my music are conservatory-trained but are equally at ease in jazz, rock ‘n’ roll, improvisation, and non-Western music, which gives a flexible, rhythmic feeling to their performances”
Steve Reich

“no wonder Reich seemed so pleased at the end”
The Telegraph 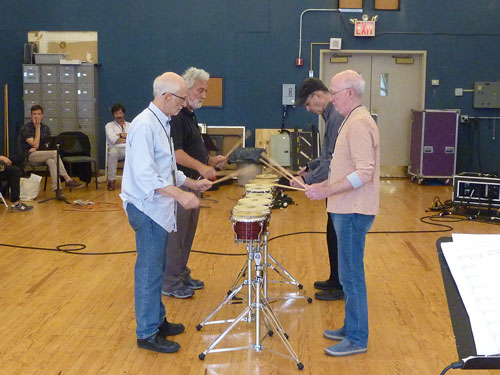 Several members of Synergy Vocals are ex-Swingle Singers and, between us, have sung Sinfonia on hundreds of occasions – including many performances conducted by Berio himself. Our most recent (award-winning) CD recording of the piece is with BBC Symphony Orchestra, conducted by Josep Pons. We never tire of performing this piece, as there’s always a new detail to focus on. Berio is all about the detail, the gesture and of course the performance! 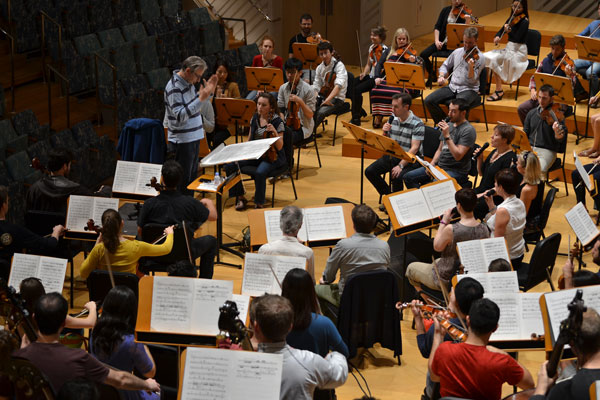 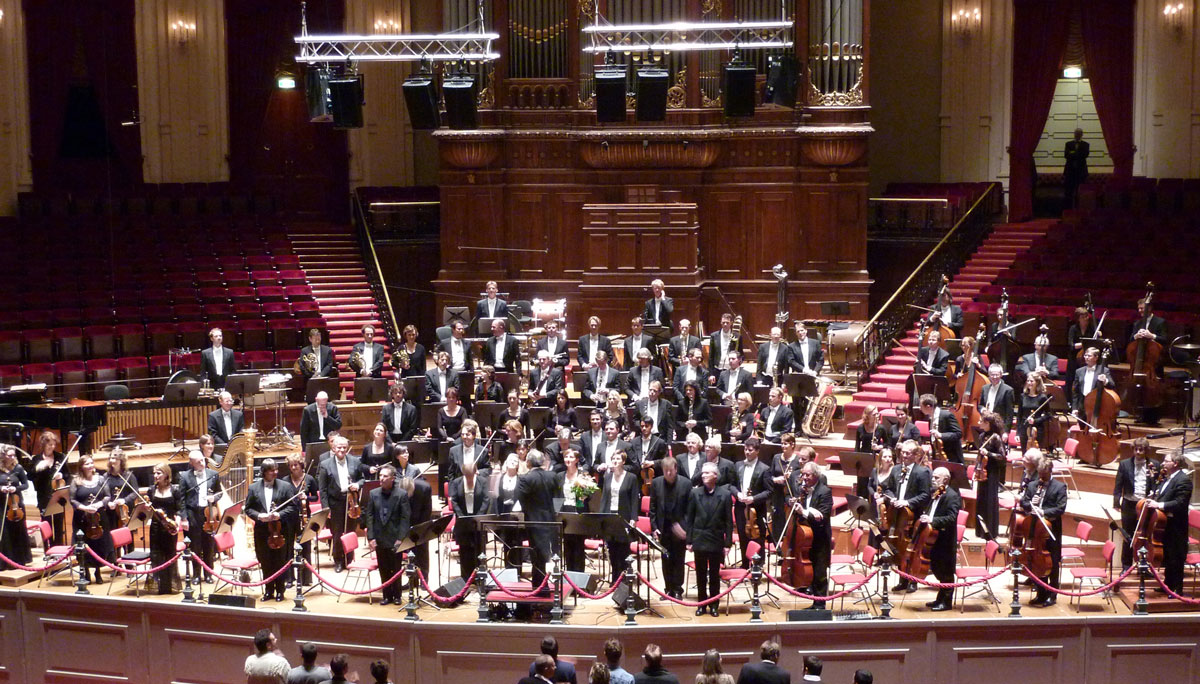 “a wonderful performance from you and your excellent colleagues - such a marvellous group!”
Paul Hughes (Manager – BBC Symphony Orchestra)

“this was a Berio Sinfonia to be proud of, valiantly and effortlessly delivered by
Synergy Vocals”
Classical Source 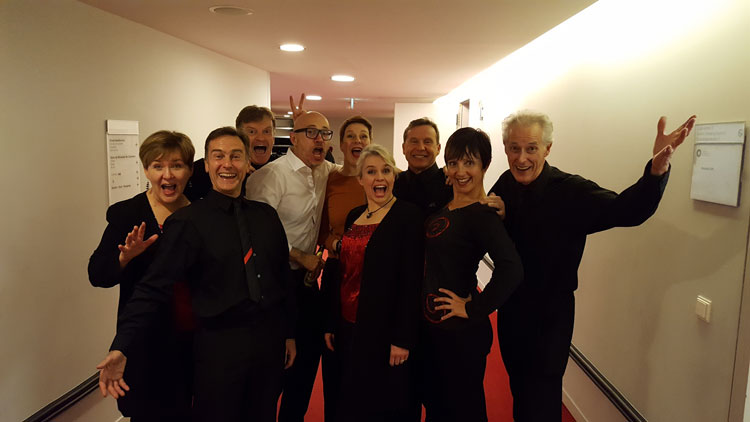 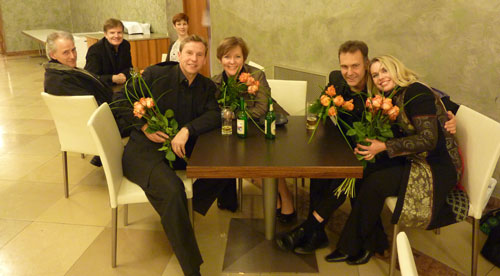 “Since I, as a teenager, heard Les Double Six singing Quincy Jones, I developed a real passion for a certain vocal sound. Christiane Legrand, Michel Legrand’s sister, sang very fast improvisations, as hot as Art Farmer. The timing, the pitches, the non-vibrato, the legatissimo all together resulted in extremely passionate and powerful musical interpretations. It took me almost fifty years to find a vocal group who could perform in this way, straight as a door (as we say in Dutch): Synergy Vocals"
Louis Andriessen

“Synergy Vocals are the best I have ever heard because they are able really to sound different from Classical trained singers. The women should not sound like Classical trained singers but should sound like 4 girls in the market in Athens 600 BC who are very angry about all kinds of things, and that is the sound I finally got from the Synergy Vocals in this performance and I am very proud of that”
Louis Andriessen 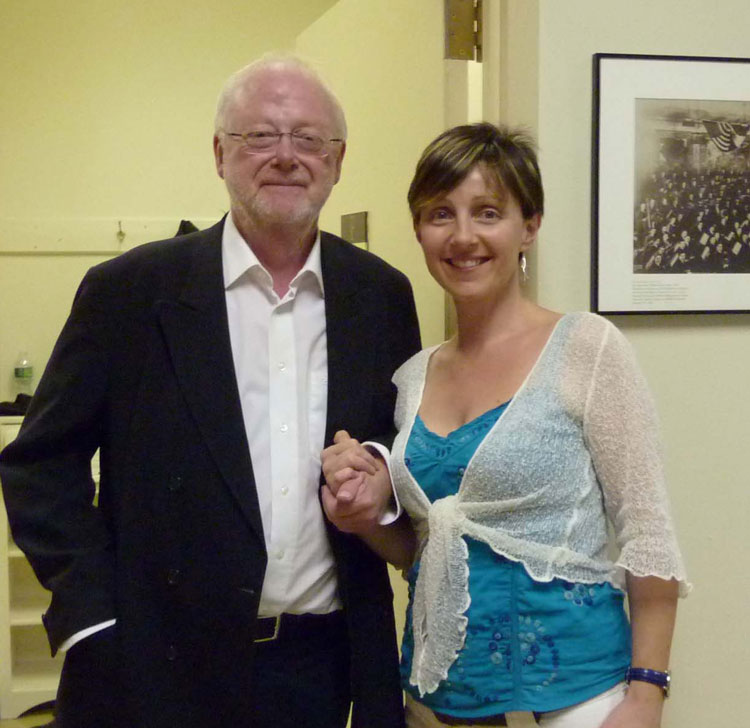 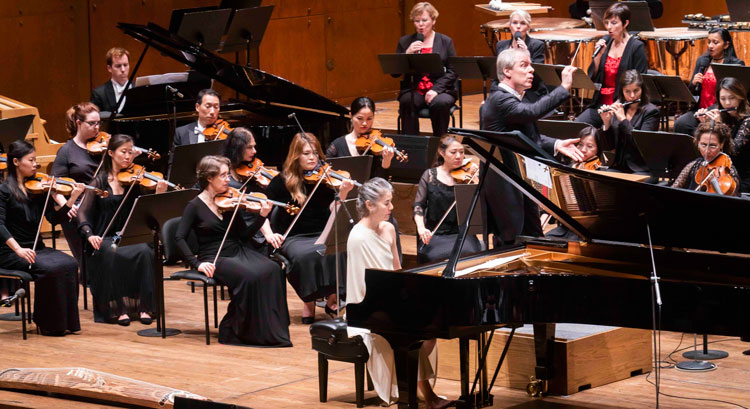 “Since the late nineties, they have sung several of my large pieces. It doesn’t get much better than this. Very nice people too – I am happy to know them!”
Louis Andriessen

“the fantastic Synergy Vocals were sharp as a knife, and more in tune than a piano”
Louis Andriessen

“Louis called to say that this performance of De Staat was one of the finest and most energetic in the history of the piece. He had special praise for the voices, which were the best he had ever heard. The Greek pronunciation, the sound and the intonation - everything. I couldn't agree more!”
Jurjen Hempel (conductor) 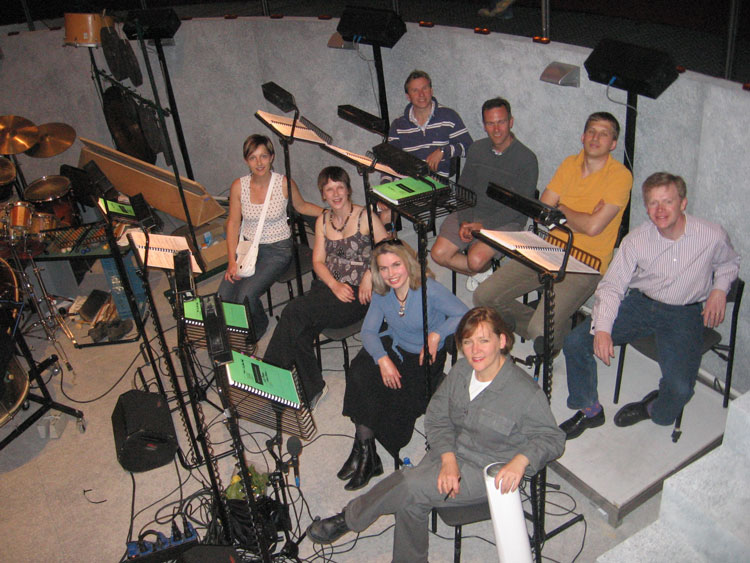 Our first performance of Grand Pianola Music was conducted by John Adams in San Francisco back in 2000. John explained that the sinuous opening lines of the 3 female vocalists should sound beguiling like the voices of sirens, then just a few moments into the rehearsal said that someone might have to chain him to the mast! Happily, in 2015, we finally recorded the piece with John conducting the San Francisco Symphony Orchestra, along with Orli Shaham and Marc-André Hamelin on pianos. 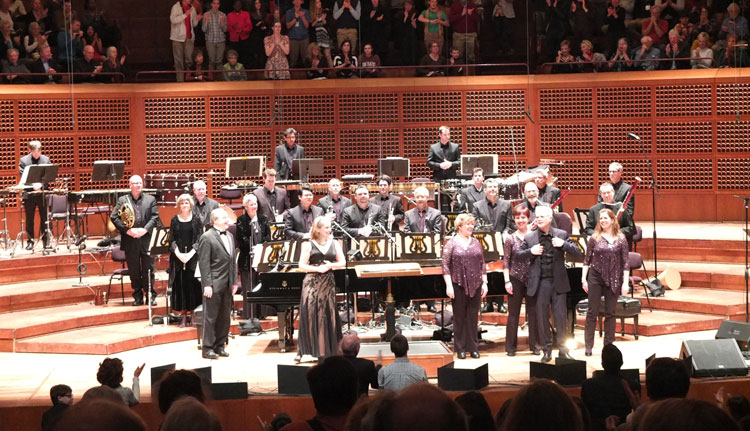 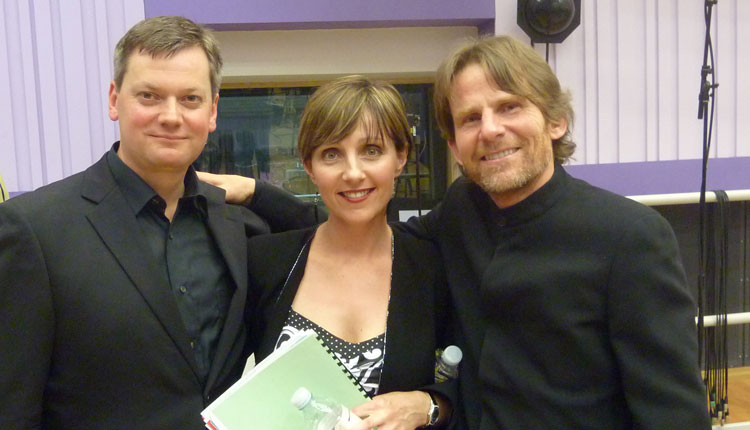 “You were recommended to me as being excellent musicians, excellent rhythm, well-trained, with a non-operatic, pure tone. This is exactly what I am looking for!”
Steve Mackey 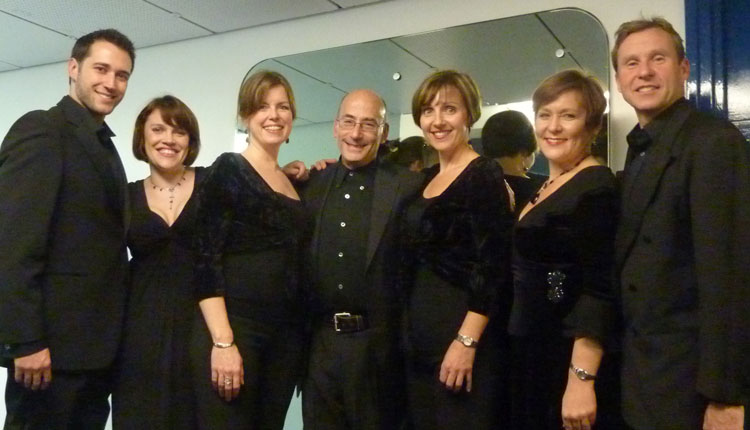 “Thank you for being such a patient and generous collaborator and helping me finally complete the ten-year vision of Earth and the Great Weather. It’s been a joy to work with you and I hope to have the pleasure again”
John Luther Adams

“I first heard Micaela Haslam singing Tehillim  with Steve Reich in London. She so impressed me that I invited her to become involved with the Karl Jenkins Ensemble. I composed Imagined Oceans with Micaela, Sarah and Heather’s combined range of over three and a half octaves in mind”
Karl Jenkins

“I am very happy that you will be singing Shelter. It would be great to do more performances of it with Synergy”
David Lang

“It sounds amazing... your vocals always make me smile. It was exactly what I heard in my head”
Rob Reed 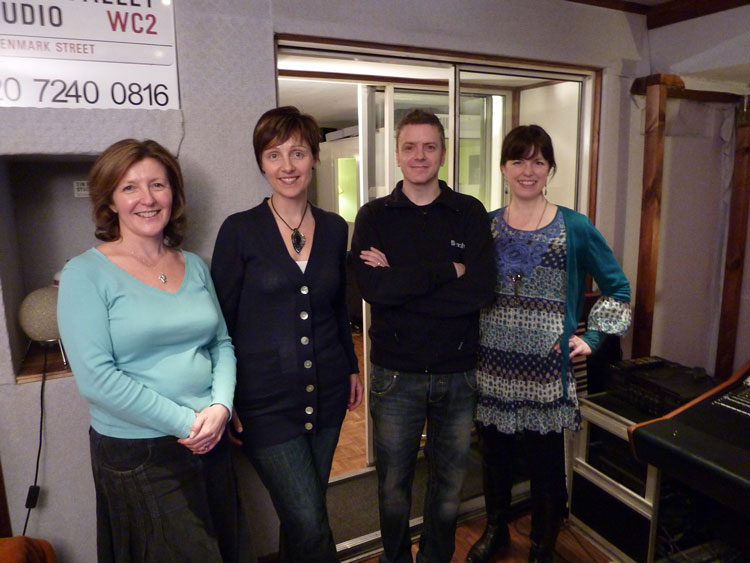